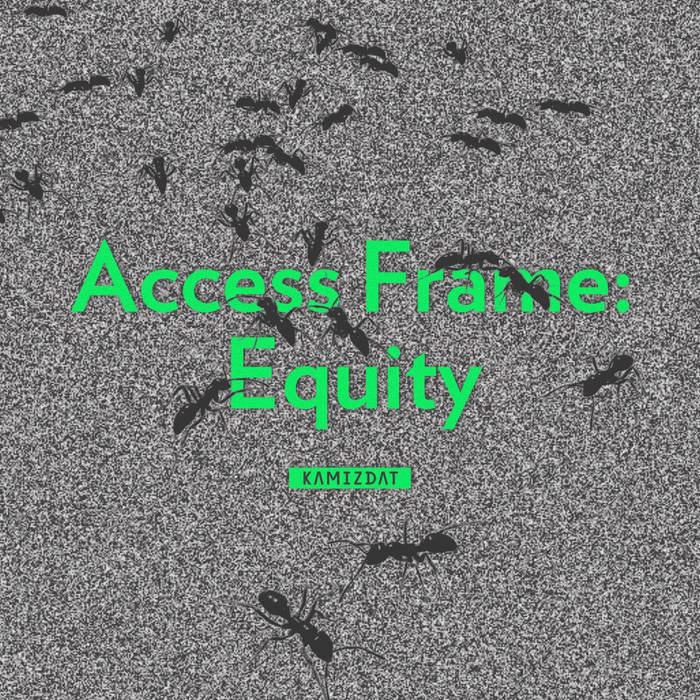 Kamizdat is proud to present a 2020 Netlabel Day release.

Access Frame: Equity is a compilation of 20 local electronic artists with many original works that span a wide spectrum of electronic music genres: from noise and sonic art, via bass, breaks, all the way to acid techno. The concept of the compilation is to bring attention to the conflict between necessity of free culture and enclosure of culture by copyright law. The conflict which is temporarily solved by Creative Commons licences.

▶ BeatMyth: The Left Eye ▶
arranged and produced by Igor Vuk
more at beatmyth.blogspot.com

▶ Shekuza: Tesla Galvani ▶
"With this track I wanted to explore the world of bioelectromagnetics, which was pioneered by Luigi Galvani in 18th century and tried to make a sequence of sounds that would mimic electromagnetical patterns and signals which are produced by living cells in the human body and flow as electrical current in our nervous system and muscles."
arranged and produced by Miha Šajina - Shekuza
more at shekuza.bandcamp.com

▶ Nulla: Elektromagnetik ▶
arranged and produced by Nulla
a special mention goes to Nitz
mixed in Studio Friteza
more at soundcloud.com/nulla0

▶ rouge-ah: niti ▶
arranged and produced by rouge-ah - Urška Preis
niti is a remake of rouge-ah's composition for a theatre performance NITI / THREA_S by Danijela Zajc
mixed by rouge-ah and nitz in Studio Friteza
more at rouge-ah.bandcamp.com

▶ umdhlebi: 1disrupt3violence1monopoly2 ▶
"We should disrupt violence monopoly! Take violence back in our hands! Attack the state! Smoke pigs!"
synths and pedals by umdhlebi - Luka Bevk
produced by umdhlebi
more at umdhlebi.bandcamp.com